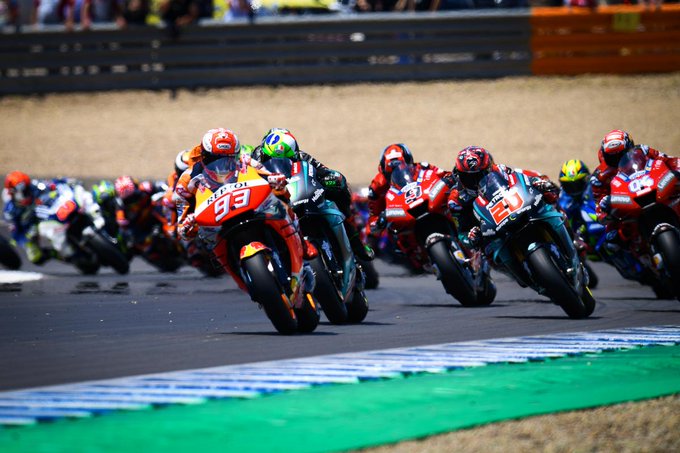 Fabulous Fabio in the excellent display of his riding skills was able to bring home yet another win for him in the current MotoGP 2021 season. It is his third win of the 2021 season, he is currently sitting on the top of the riders championship 24 points clear of the nearest challenger. Fabio has been in fine form this season, he has been on pole four times and has scored the highest number of victories 3 so far. A month back Fabio has heartbreak in the race as lost a possible victory in Spain due Arm-pump issue, now he is back in Spain as we go for round 7 of MotoGP at Circuit Catalunya. Sportfsfeista brings you complete details of Catalan MotoGP 2021 Live Stream, Schedule & Live Telecast Information of Gran Premi Monster Energy de Catalunya.

MotoGP Championship battle shaping up beautifully, we are not even half the season but already getting an impression of a very competitive one. We have seen the brute power of Ducati in many of the races but then Yamaha has been impressive so far. But for this season Suzuki is also looking very competitive, it is just that they are not able to perform in qualifying. Honda is really suffering as Pol is adjusting to the new bike and their ace rider, multiple champion Marc Marquez has looked at the pale shadow of his glorious past. Marquez has not been able to complete the last two races he participates.

Fabio Quartararo continued his fine form and has snatched yet another pole of this season. This was his 5th pole of the season, he was followed by Jack Miller & Johann Zarco.

Fans in India will get to see Catalan MotoGP 2021 action on Eurosport, you can also watch it through the Jio TV platform. MotoGP fans in Asia will get to see the action live on Fox Sports Asia, Super Sports will telecast MotoGP in South Africa. The fans in the Middle East will enjoy MotoGP action on OSN sports. In Latin America, the broadcast right is with ESPN Latin, ESPN HD, and ESPN 2. Fox Sports will broadcast the MotoGP action in Australia while SKY sports will bring live-action to fans in New Zealand. LeTV&Wasu TV will bring live-action to Chinese fans.

For the fans in Indonesia, live-action will be on Trans 7, Malaysian fans can enjoy the action on RadioTelevisyen Malaysia, NTV & G+ will broadcast MotoGP in Japan.  Canadian fans can also watch MotoGP on DAZN. Euro Sport will bring MotoGP Action to France, Belgium, Netherlands, Romania & Germany. In Italy SKY Italy will bring MotoGP action. Movistar TV will telecast MotoGP in Spain, and Spanish fans will also enjoy the action at Onesport& Vodafone. In the UK the broadcast will be managed by BT Sports.

Catalan MotoGP Final Race is on Sunday, June 06th, 2021 Timings Across the Globe

Located in the historic city of Barcelona, Circuit Catalunya is all set to host Catalan GP 2021. The circuit was built in the year 1991. The total length of the circuit is 4.7 km. It has a total of 14 corners 6 on the left and 8 on the right. The longest straight in this Catalunya is 1047 meters. The MotoGP race will be 24 laps covering a total distance of 116.3 km. The 2020 Catalan Moto GP was won by Fabio Quartararo.